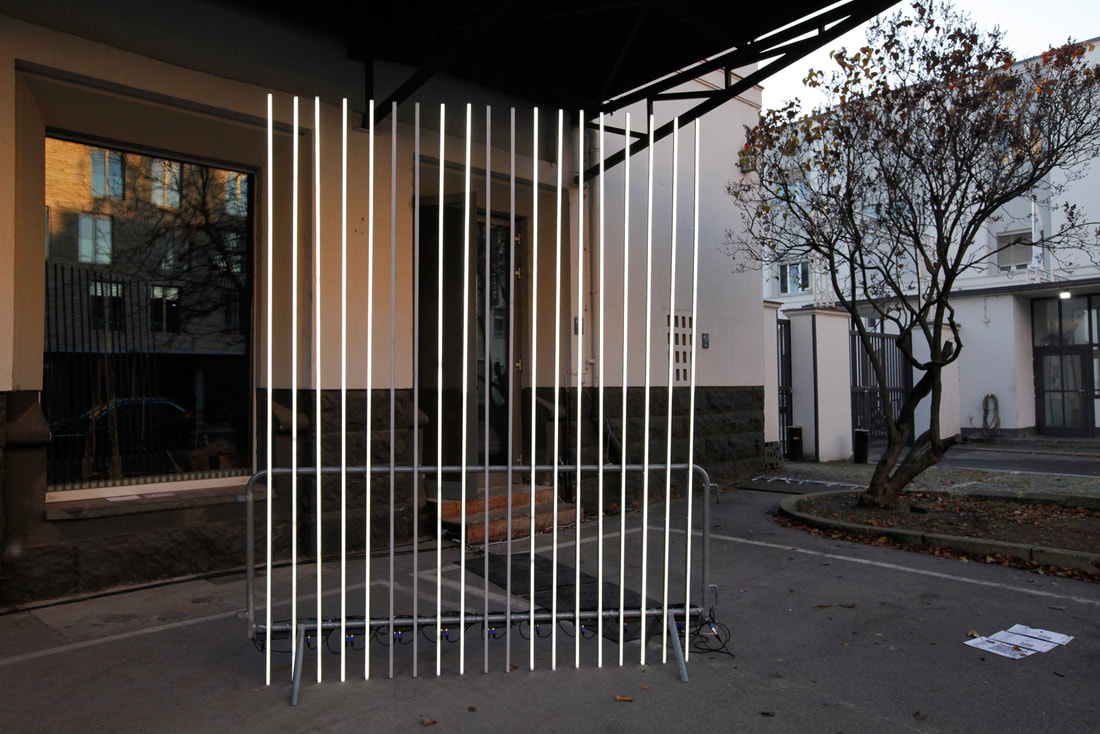 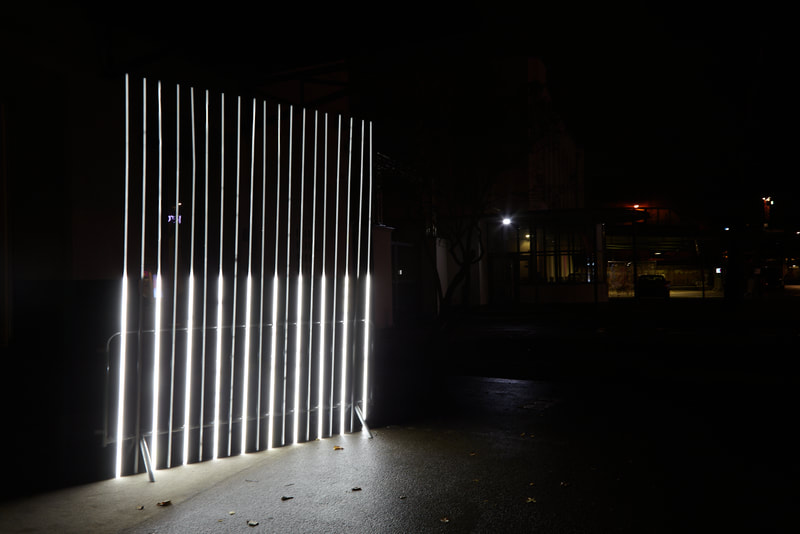 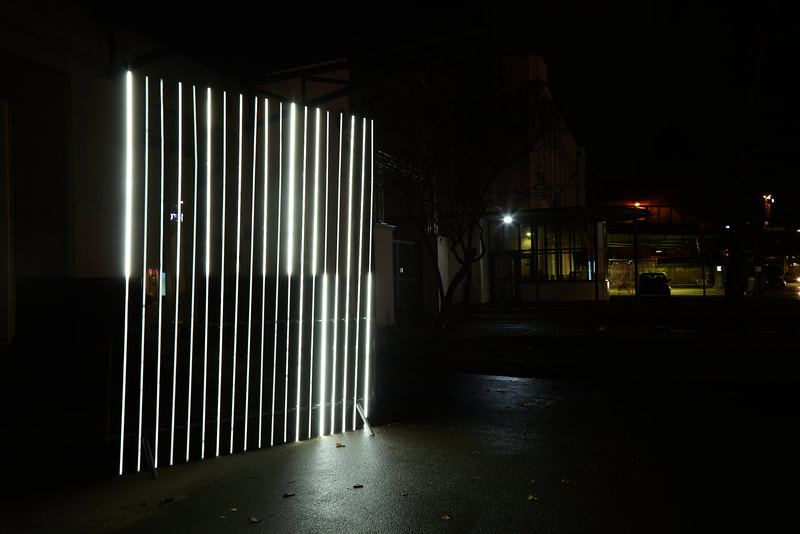 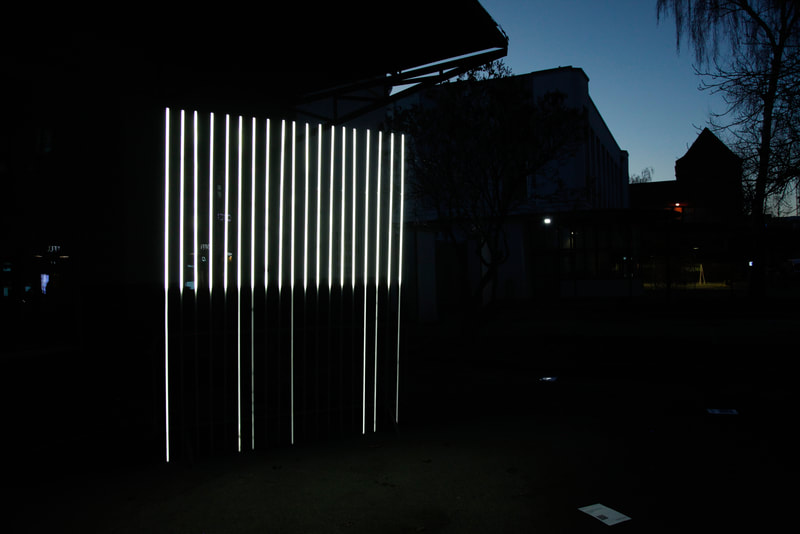 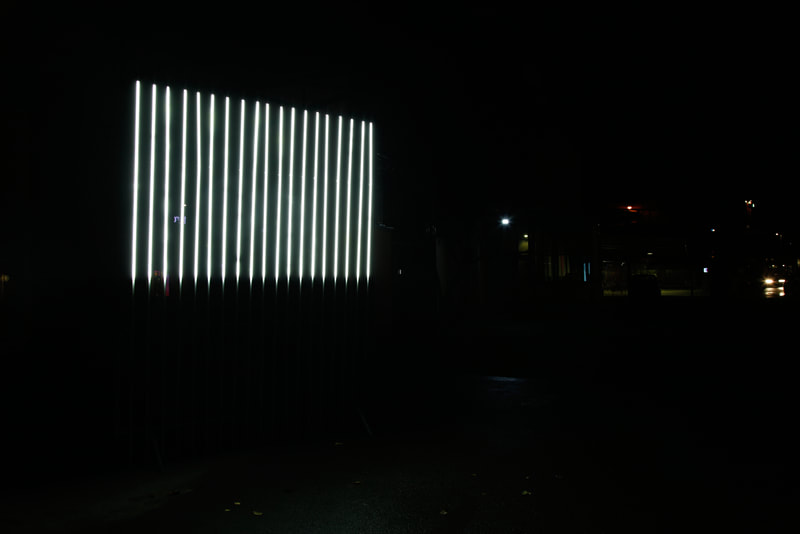 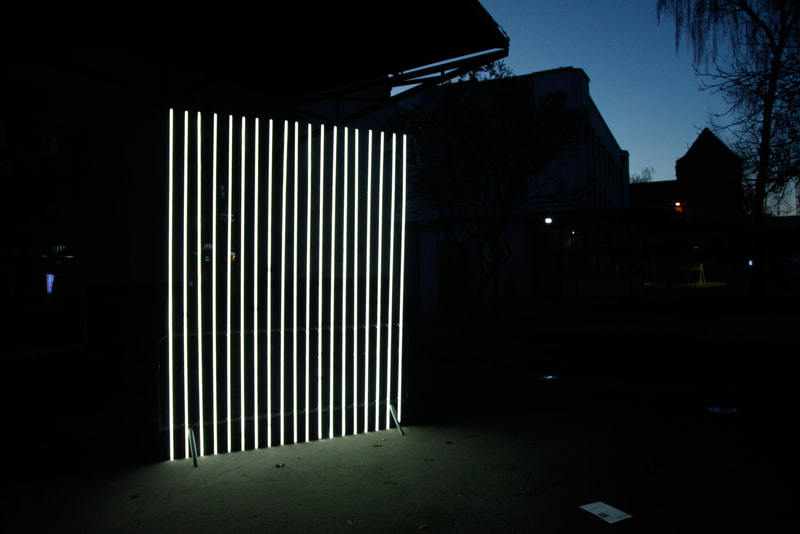 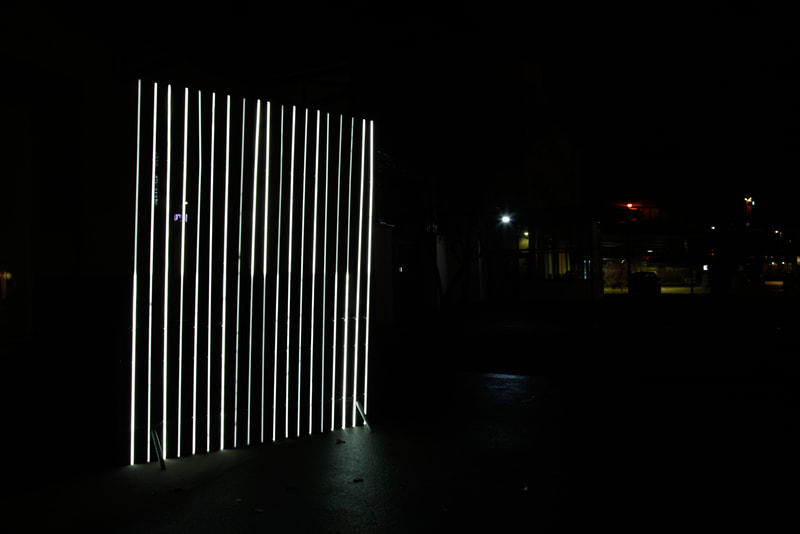 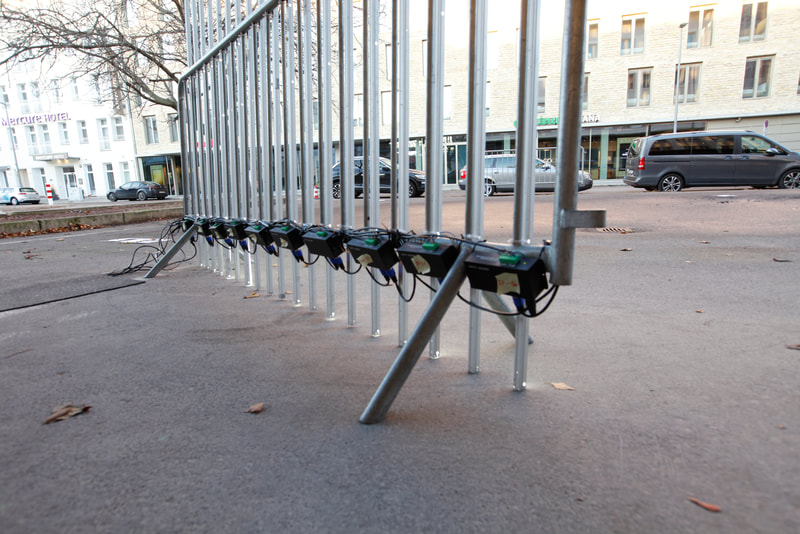 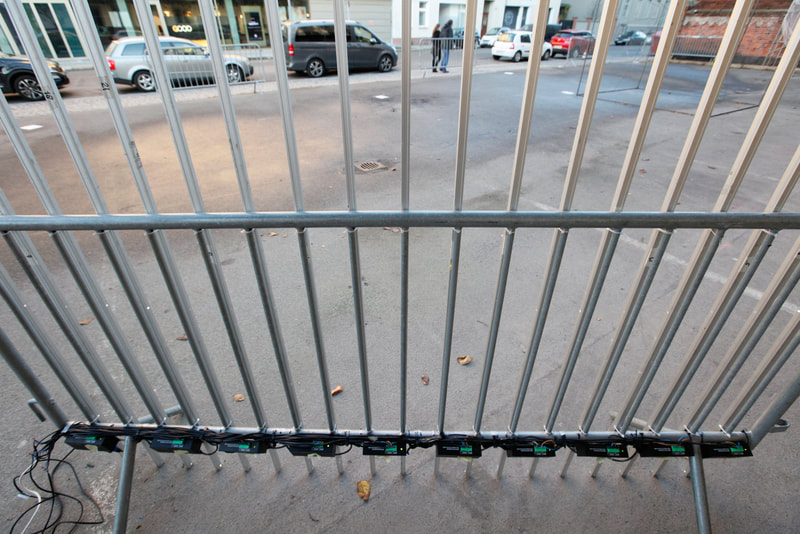 “38 variations of 1.5 meters of light attached to a crowd control barrier."
​

Absperrgitter
A sculpture by Peter Vink

A crowd control barrier with a round tube galvanized steel frame, and rounded corners, and integral feet serves as the ready-made basis for Peter Vink’s light sculpture. To each of its nineteen crossbars, light tubes are attached, which extend distinctly well beyond the element’s frame. Two light tubes of 1,5 meter in succession with one another, create a three-meter height of lines of white light in strict parallel order. They thereby, constitute a rectangle in a vertical layout, composed of two sets of light tubes, made up of two rectangles in a horizontal layout.

As long as this light unit with its balanced geometrical order is in the focus of the viewer’s attention, the underlying crowd control barrier might easily be overlooked as mere support, a readily available prop in public space. Upon closer inspection, however, it becomes evident that the narrative of Peter Vink’s ‘Absperrgitter’ unfolds where the light sculpture takes the ready-made into most productive service.

A single crowd control barrier, generally functions within a larger unit of barriers, to achieve crowd guidance by creating or blocking a pathway. Peter Vink’s single element in an open space is void of its intended function and instead, will only draw attention to its very design as an object itself. The light tubes further enhance the formal approach. The tubes underline the lower bar of the steel frame, while virtually high-lighting the top bar by overlaying and dramatically exceeding it. Thus, the light tubes both confirm and overwrite the form. The ‘confirmation’, highlights the object as a defining integral part of the sculpture. The ‘overwriting’, however, creates and emphasizes a notion of spatial depth. The field of light lines seem to first root in the element and then, float in front of it. A somewhat contradictory notion, that creates the allusion of a potentially impossible object.

Art-historically speaking, the barrier reminds the viewer of a faux Cady Noland asset and Olaf Metzel’s 13.4.1981 sculptural furor. However, conclusively, ‘Absperrgitter’ is a painting which its author claims to be an altered ready-made, which may serve as the more revealing reference point. For his Apolinère Enameled, created in 1916-1917, Marcel Duchamp claims to have creatively altered a found advertisement sign for Sapolin Enamel: A girl is shown to apply paint to the cast iron frame of a bed. Bedhead and base, echo the shape of Vink’s control barrier; The applied light echoes the paint job. More important however, is Duchamp’s depiction of the bedframe which presents a notorious and highly influential pictorial illusion, rendering the bed an ‘impossible object’. Duchamp’s or rather Sapolin’s bed is creating an illusion by the combined effort of formal ‘confirmation’ and ‘overwriting’, resulting in a highly conflicting image.

In Peter Vink’s ‘Absperrgitter’, the barrier becomes the carrier of a wall of light which seems to both, use the barrier as a support and as a point of departure; As well as it establishes a distance in the noted allusion of space. The resulting conflicting message helps to create yet another point of historical reference. The image of strictly patterned rays of light surpassing an enclosed formal unit can be read as the abstract rendition of the historical images of Albert Speer’s ‘Lichtdom’ projects.

Formally, ‘Absperrgitter’ may be closer to the Nuremberg Zeppelinfeld version in the later thirties, than the Berlin Olympic stadium 1936 dome. But, the peacetime abuse of wartime equipment which, as Friedrich Kittler pointed out extensively, the Nazis so fruitfully placed at the disposal of popular culture, has forever historically tainted the concept of a ray of light directed from the ground into the sky for the mere purpose of entertainment; On German soil in general and most specifically in Berlin. The celebratory act of shooting light into dark skies as a token of joy and festivity came to serve as the protective barrier to shield urban environments from the self-inflicted danger of an intrusion of bombs directed at both: Defeat as well as at involuntary liberation.

Peter Vink’s ‘Absperrgitter’ is a formally restricted and conflicted portable ‘Lichtdom' unit. The contained light show comes with the barrier for the show, all-inclusively. Festivity and its denial depend on each other. History and presence merge in an impossible object. ‘Absperrgitter’ is an artwork, very accurately designed for its destined location. And through the realm of formal obviousness, lingers historical reflection, only to meet a current sentiment of a troubling desire for celebration and entertainment in the times of the Covid 19 Pandemic; In the heart of Europe’s self-declared center of art, culture and party. Here, the current wartime rhetoric of strategies for collective protective measures, cast against the individual desire to rage, is translated into an object of pungent visual narrative simplicity.

Rafael von Uslar
This artwork is supported by: