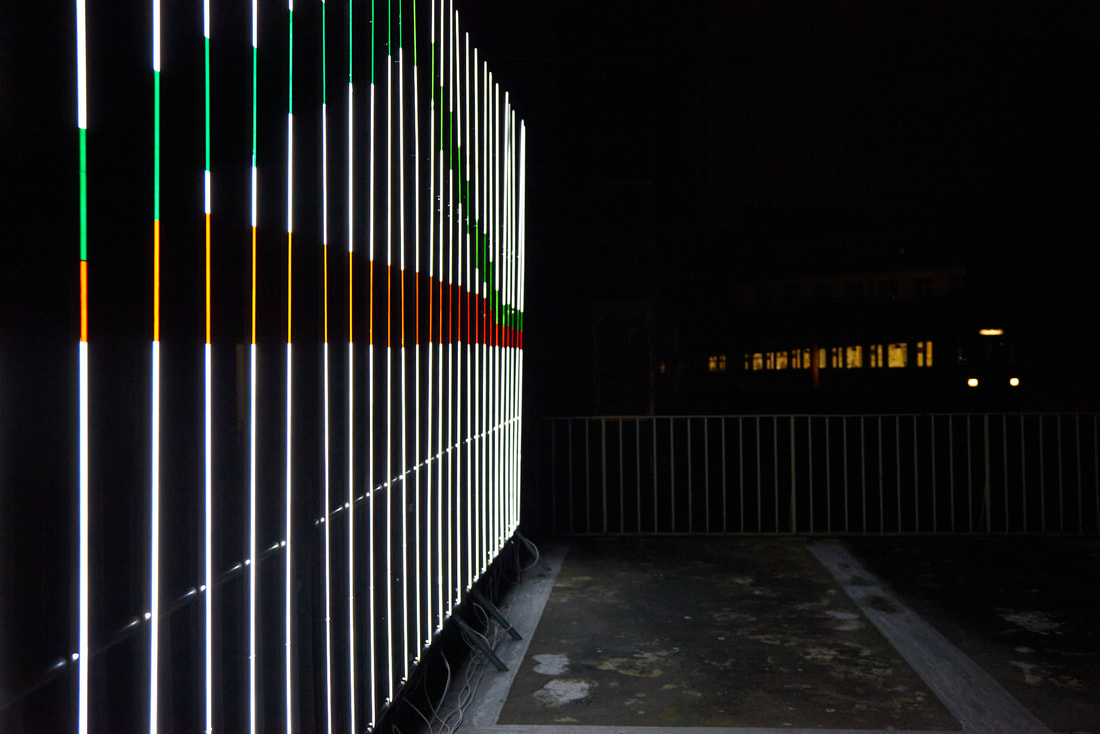 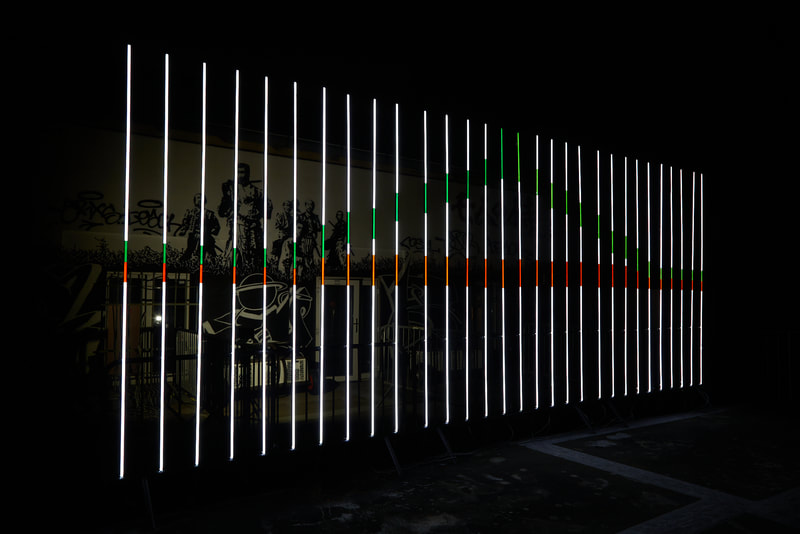 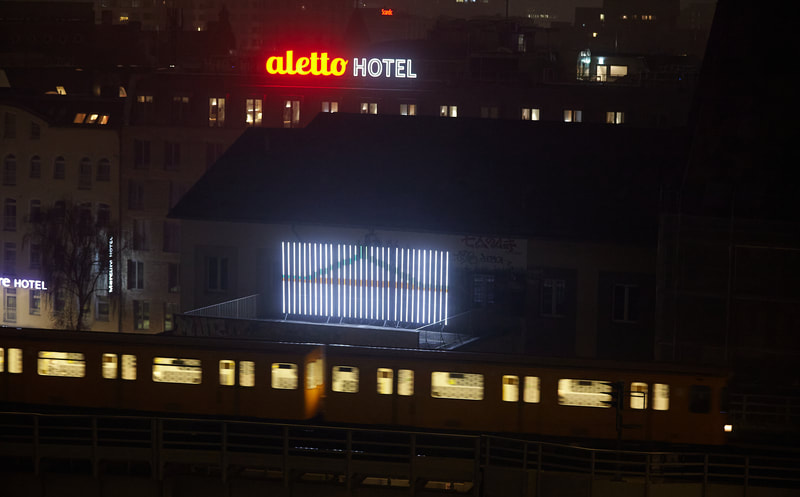 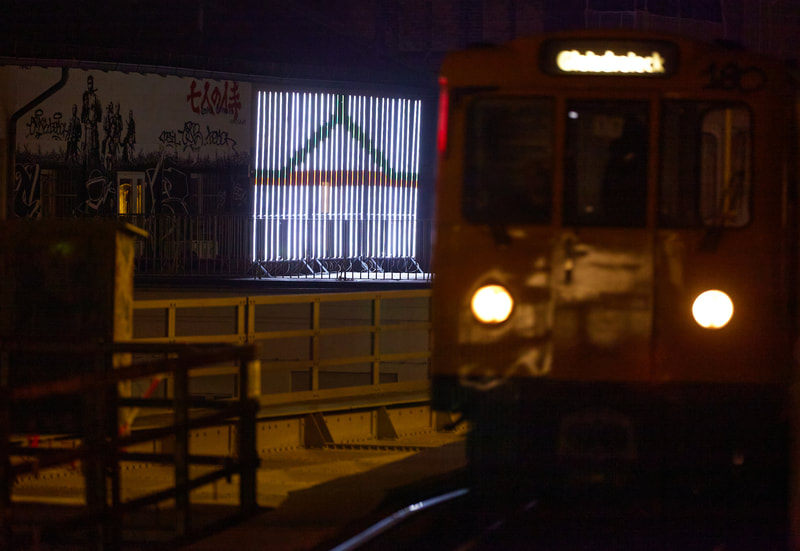 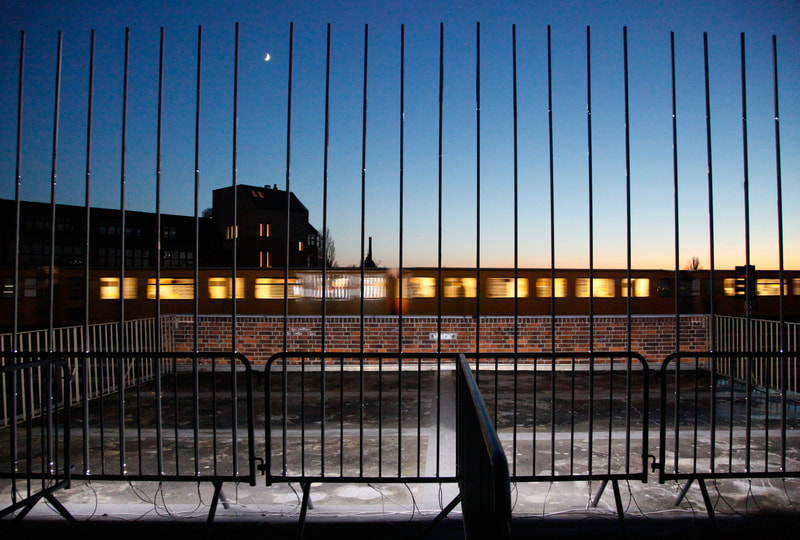 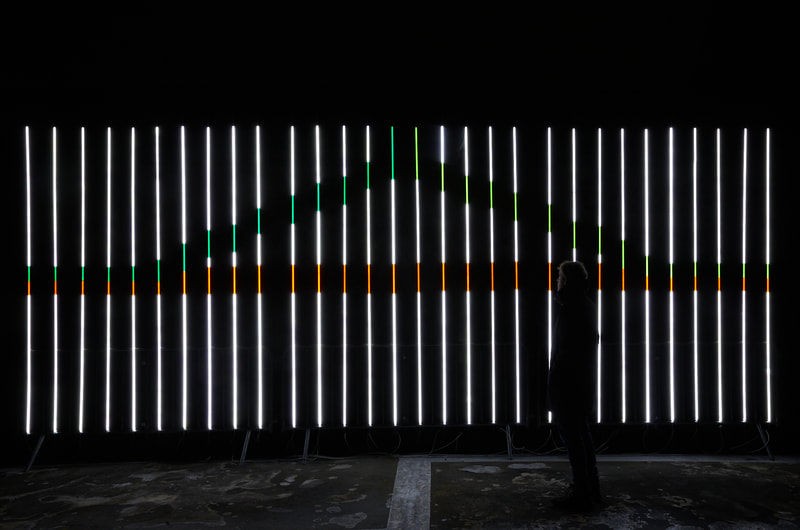 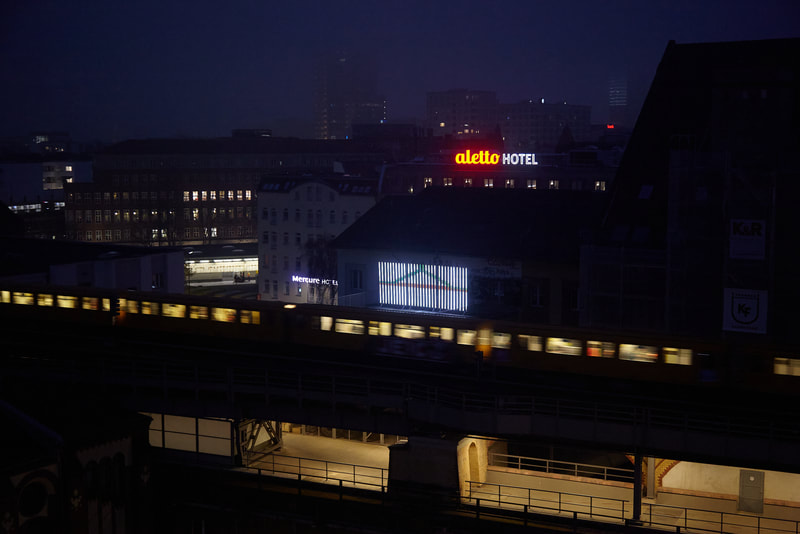 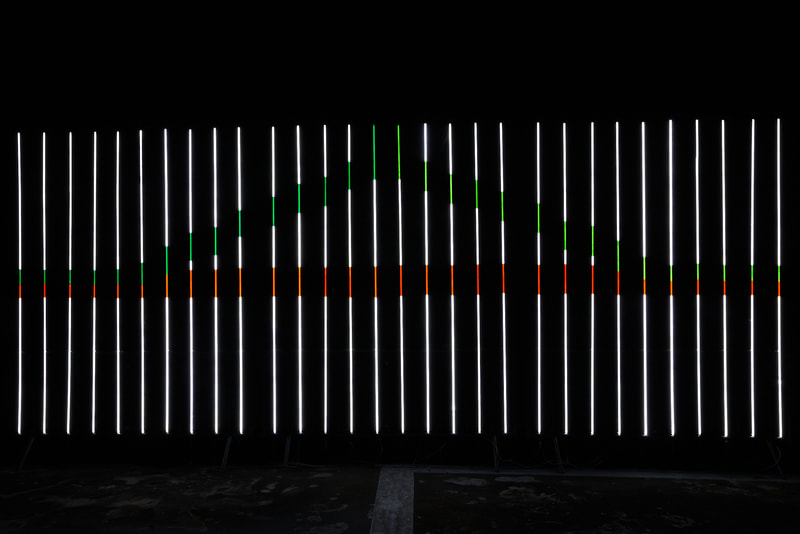 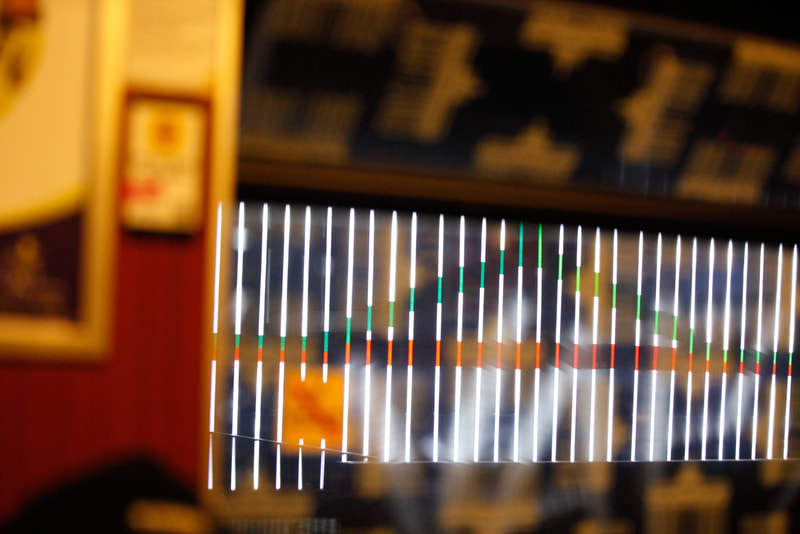 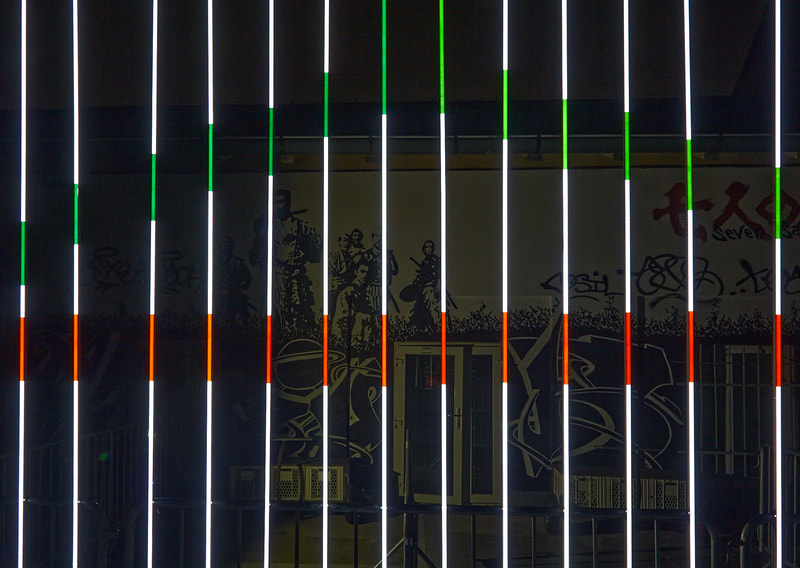 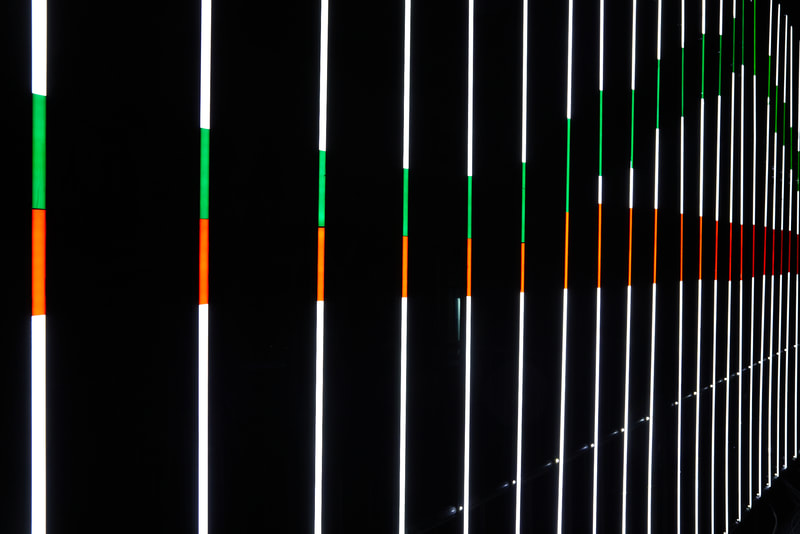 We find ourselves with a typical Berlin subway view: the site of Berlin’s backsides. One of the buildings of STATION Berlin features a side wing, extending between the back of the STATION Berlin edifice and the adjacent viaduct of the above-ground subway lines U1 and U3. Its rooftop is on eye level with the subway tracks and has an additional 10 x 11 meter terrace, separated from the subway only by a low wall. On the terrace, Peter Vink installed his free-standing light installation Gleisdreieck, viewed almost exclusively from inside the passing subway trains.
Gleisdreieck is a wall of light made up of 30 white LED tubes at 3 meters high. Gleisdreieck consists of three interconnected crowd control barriers at 2.50 meters long to carry the lights, which allows the installation to be free-standing on the terrace. Gleisdreieck radiates white light, but it’s just bright against the hollow sky.
The white lines of light are interrupted by a drawing made of applied colored foil, showing three merging lines. The colored foil reflects the actual subway tracks crossing at Gleisdreieck since 1912/13, giving the traffic junction its iconic name. The red, light-green, and dark-green lines of Peter Vink’s artwork stand for the colors officially assigned to the Berlin subway lines U1, U2, and U3; According to the color chart of the cartographic system by the BVG (Berlin public transportation system).
Thus, Gleisdreieck becomes a pictogram of the actual location the subway trains are passing by. Passengers, who manage to decipher such coincidences, will experience more than just a mere “you are here” moment: The drawing is a visualization of their moving landscape, which this installation both graphically lays out and highlights. Gleisdreieck manifests the point of being present and always moving forward, within a graphic line and all-inclusive.
This large light installation is akin to an urban landscape. Gleisdreieck operates in a cultural tradition that spans widely, from no less than Peter Brüning’s street sign pop-language from the late 60s and 70s of Europe’s 20th century to the justified and ancient Australian Aboriginal iconographic traditions of over 80,000 years.
However, there is yet another significant formal reference, defined exclusively by the immediate surroundings. Most of the walls have various graffitis in multiple layers, and they are visible from both sides: the subway train tracks and the rooftop terrace. As true icons of Berlin’s torn backsides, graffiti is part of the local urban landscape art. The graffiti frames the light installation and also offers a semantic duality. The colored foils attached around the light tubes highlight a gestural act, just like a drawing or spraying. It also emphasizes the act of overwriting the light. The simplicity and clarity of the line drawings qualify itself as a tag, a public display of a signature, which here functions as an image of the surrounding. Let’s hope that the consequential irony is not lost on those tempted to “cross” the tag with spray paint in the weeks to come!
Peter Vink’s light installation Gleisdreieck is a highly formal intervention in public space; Its references to its specific location and the rich visual narrative traditions employed make it an excellent homage to Berlin’s urbanity.
His audience is the passengers of the Berlin subway lines, gazing into the Berlin cityscapes. Behind the glass, they will see the installation framed through their subway windows, but for a brief moment only! Just like a movie played in slow- motion, the actual frames of the negative will start to show slowly.
Gleisdreieck is a largescale light installation created for the passenger, “who rides and who rides through the city’s backsides. Looking through the train window so bright. And everything looks good.”

Rafael von Uslar
This artwork is supported by: